The PWAA team started the tournament strong by defeating Belleville 4-2, Chicago Young Americans 2-0 and Oshawa 5-0.  The team then hit a tiny bump in the road with a loss to Durham West.  They finished with a 3-1 record in round robin play and clinched first in their pool. 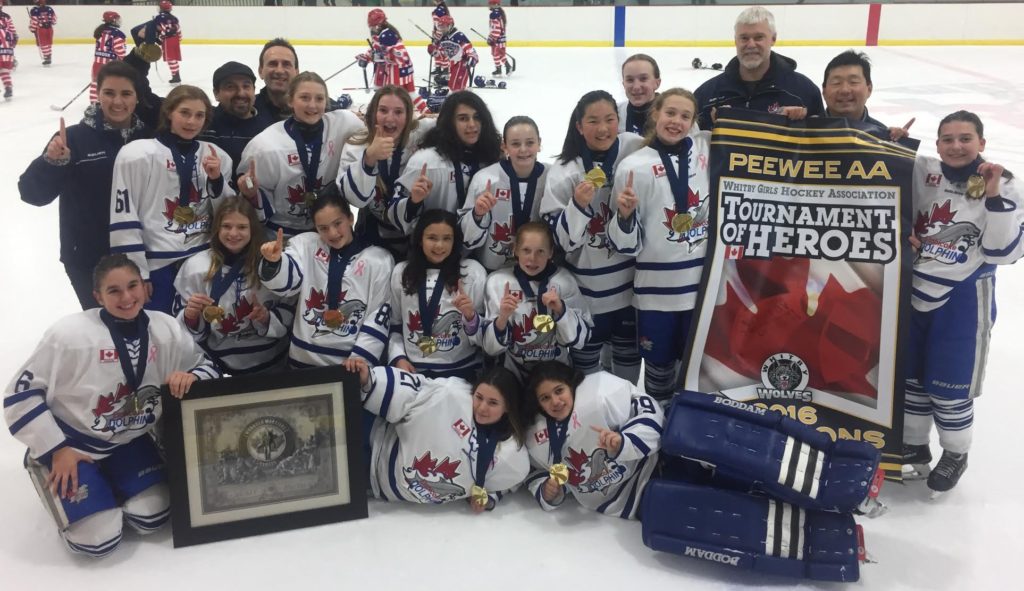 Off to the semis they went to play a tough Cambridge team.  The girls dominated the game and came out victorious defeating Cambridge 4-0.

The final game saw a rematch between the Etobicoke Dolphins and the Chicago Young Americans.  Both teams met just weeks earlier in the finals in Rochester where the CYA came out on top after a shoot out.  The Dolphins were NOT going to let that happen again.

The game was a battle going back and forth with CYA scoring first.   The time was ticking down and with less than a minute to go in the third period the coaches pulled the goalie for the extra attacker.   The girls battled and never gave up and with 17 seconds left they managed to put one past the CYA goalie.  The game was now tied and heading to overtime.

Overtime was no different.  It was a battle back and forth between the two teams.   With less than a minute to go the Dolphins defence rushed the puck up the left wing, around the back of the net and then passed the puck to a forward waiting at the backdoor to bang home the game winner.  What an exciting finish.

The PWAA team played an amazing weekend of hockey and the coaches, staff and parents are very proud of all the girls.