The Etobicoke Dolphins Novice A team entered the Toronto Leaside Wildcats 38th Annual March Madness Girls’ Hockey Tournament hoping for a boost as they enter the final month of the hockey season. 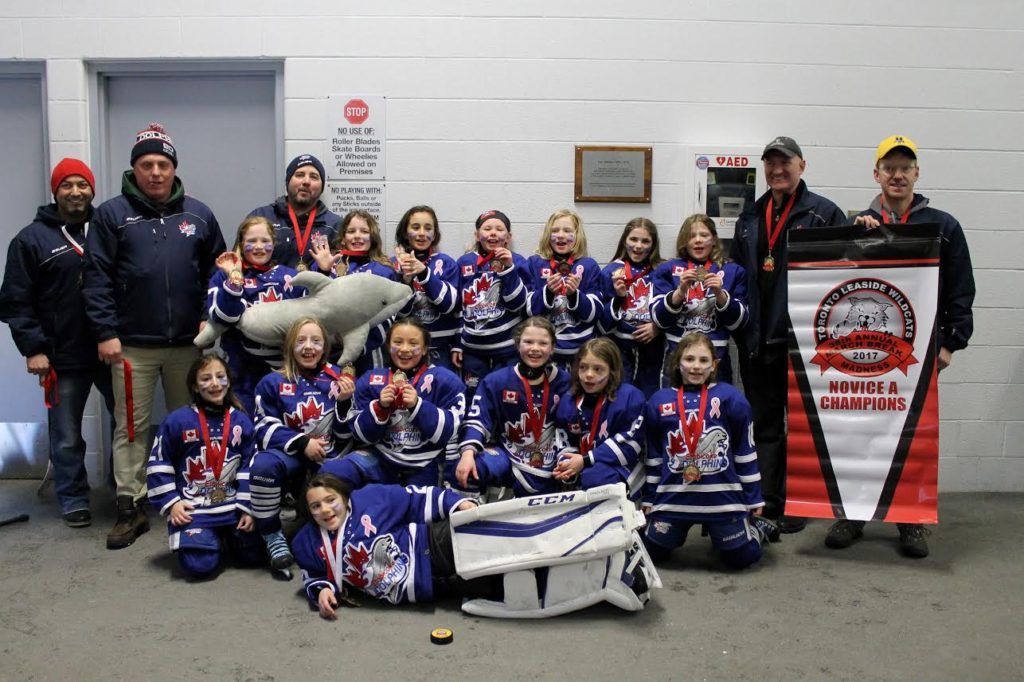 The girls skipped school on Friday afternoon to take on the host Leaside Wildcats.  Vivian got the Dolphins only goal of the game (a beautiful end-to-end rush) and while the defence crew of Emma, Isabelle, Kate, Karli and Riley kept the opponent’s chances to a minimum, they could not keep the Wildcats off the board and Leaside ultimately prevailed by a close 2-1 score.

Saturday’s games brought renewed hope and the girls did not disappoint.  Bianca deked her way through London’s defence, leading the charge with a goal in a 2-0 victory.  The Dolphins thoroughly outplayed London, with an aggressive forecheck from (among others) Emily, Geneva, Lauren and Sidney who kept the Devilettes pinned inside their own blue line for much of the game.  When London did get the puck down the ice, Ava was up to the task and picked up the shutout in the win.

In the second game of the day, the Dolphins knew they needed a win to guarantee a spot in Sunday’s gold medal game.  After falling behind 2-0, the Dolphins clawed their way back into the game, and lived up to their reputation as being “cardiac kids” when Laura scored the game winner (and her second goal of the game) with 4.8 seconds left on the clock.

The win put the Dolphins into the final where they would once again lock horns again with Leaside.  The Dolphins brought out all of their good luck charms (including “Chubbs the Dolphin”) and the team was buoyed by the unexpected presence of May, who changed a flight and delayed the start of her March Break to part of the team for the early Sunday morning game.

The time change did not negatively impact the girls and they came out hard against a stingy Leaside defence, and goals by Vivian and Laura put the Dolphins up 2-0 going into the final period.  Leaside got back in the game with a goal midway through the third, but could not pot an equalizer and a last minute empty net goal by the vacation-delaying May sealed the gold medal and a 3-1 victory for the Dolphins Novice A team.

The player of the game in the championship game was the goalie, Ava, who played four excellent games during the weekend, stopping a number of close shots and breakaways.