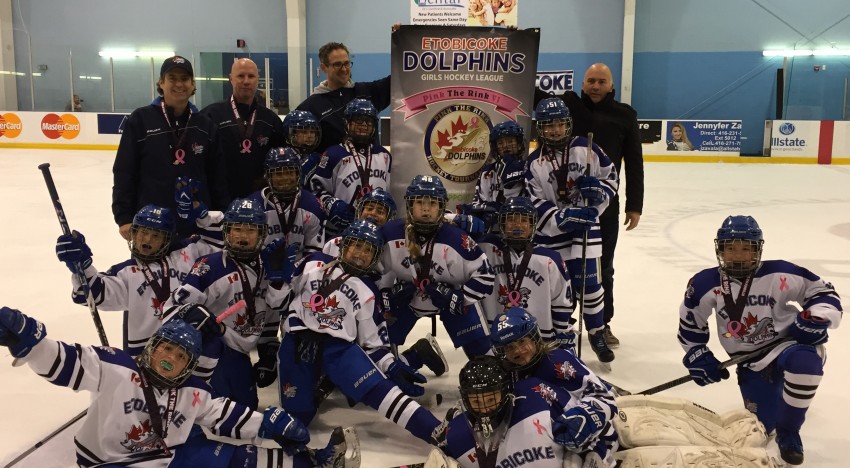 The Atom BB Dolphins continue their winning ways to earn gold at Pink the Rink VI. Spurred by the importance of supporting breast cancer charities as championed by their home tourney, the Dolphins battled through tough round robin games including competitive games against the Leaside Wildcats and Sudbury Wolves and a scoreless tie with the Aurora Panthers only to squeeze through an emotional seesaw semi with the North Halton Twisters.

In the final, the Fins once again faced the formidable Leaside Wildcats. Big guns Julia “Score Sheet” Bullock and Emise “Beast” Grande, fresh back from injury, scored for the Dolphins to get a lead. Defenders, “Queen Vic” Damiani, Emma “Powerhouse” Venusio, Maddy “Mojo” James, and Leagh “Lightning Loo” Cox helped keep that lead through to the final buzzer.

While game MVP honours for the tournament went to Lauren “Brick Wall” Brazel, Aislinn “Machine” Poulimenos, Ally “Cat” Cop and Trinity “Tweety Bird” Zucchiatti, every single player contributed to this success, including Celena “Mickey” Mickevicius who played valiantly through illness, Angelica “Jelly” Harris who was good for four goals on the tournament, “Awesome” Abby Dalton who gave her shoulder pads a workout every game, Amelia “Magic” Gardiner who launched a rocket while flying down the left wing in game 1 and Mack “Attack” Allen who decided to win a cross country medal between games.

These Dolphins humbly acknowledge the hard work of the tireless PTR committee and all the volunteers for putting on such a great tournament, providing a tremendous platform for all the teams to compete as well as an opportunity for money to be raised for a cause dear to us all.