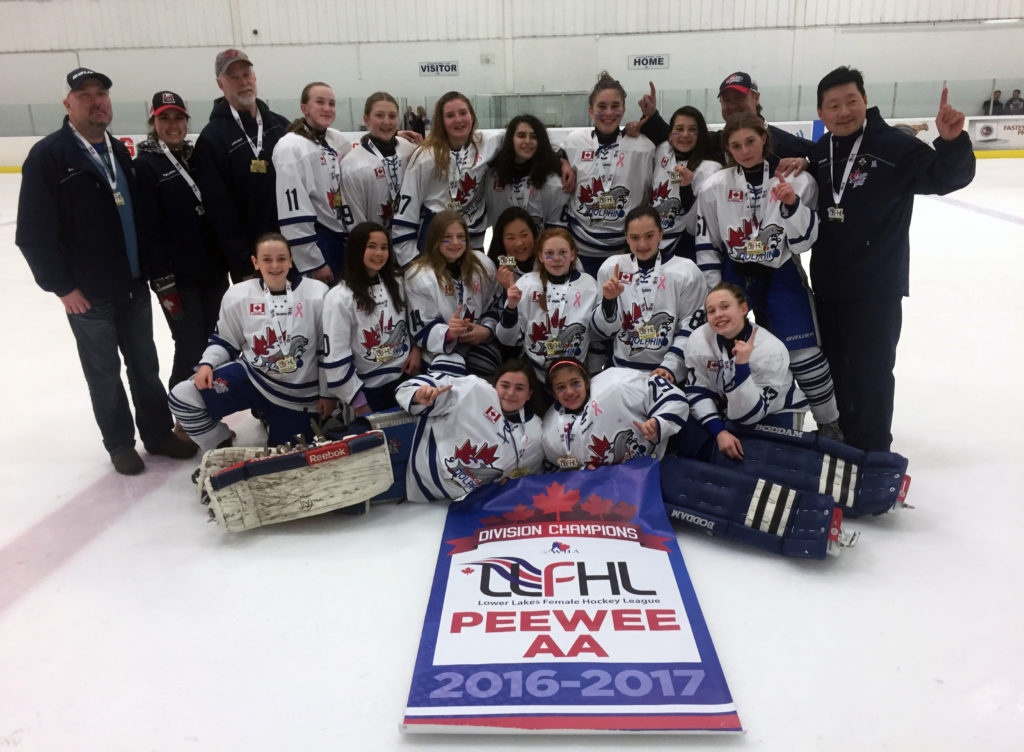 It was the circumstances under which they prevailed that were most impressive. Many of the girls were sick fighting flues, colds or ailing with injuries and in game two of the round-robin against Stoney Creek, the team was missing two of our five defensemen, requiring some forwards to drop back to defense. The Phins playing with twelve skaters scrapped out a 1 -1 tie after a misdirected shot found the back of our net.  Previously, the Dolphins opened the tournament with a 3-0 win over divisional rival North York Storm.
The next three games saw the Dolphins start with a 3-1 win over a very skilled and aggressive Ancaster team with three late third period goals. Next, the girls held off a hard working Belleville Bearcats team 1-0 and then prevailed over East division champs Durham West 2-0, drawing top seeding and a chance for the gold medal.
The gold medal match saw two gritty and tired teams fight hard and our Dolphins consistently pressed an exceptional Ancaster goaltender, peppering her with shots and close in chances. Yet, heading to the third there was no score. Mid way through the third period, Haley Kliem rushed the puck up the ice and fed Claire Shepherd in front of the net for what would be the winning and only goal of the game. Shepherd finished the tournament with three game winning goals.
Other goals and assists were scored by Charlotte Garofalo, Natalie Clemenzi, Alyssa Regalado, Mckenna Van Gelder, Charlie Lewis, Wallis York and Emma Fulawka.
Perhaps most inspiring was the fact that the Phins gave up only two goals in six games. This was great team defense and goal tending with two shutouts each earned by Phins goaltenders Mari Pietersen and Kaelen Parker—the Dolphin Killer P’s!
Exceptional hard work and determination was displayed all weekend by Alana Tymochko, Paige Allen, Cristina Cavaliere, Ava Bilton and Diane Choi.
Congratulations Dolphins: your team play, grit and work ethic made this weekend an inspiration to all who watched you. Now get rested and healthy for OWHA Provincials this coming weekend!