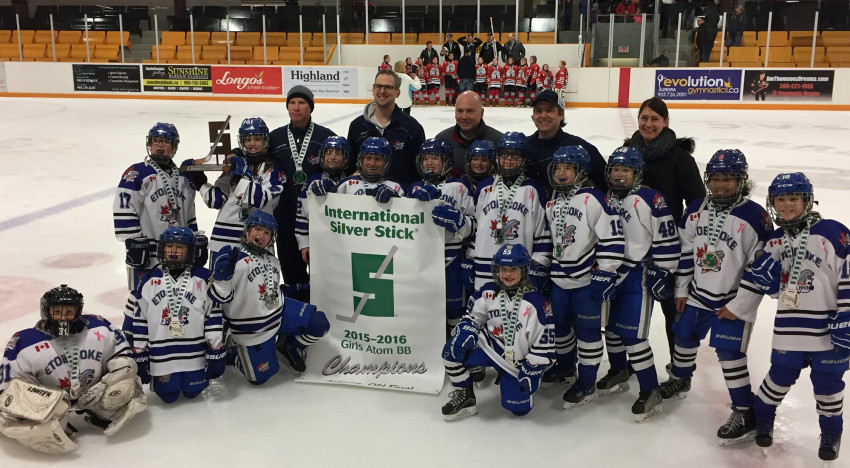 After strong play in the round robin play at the Aurora International Silver Stick Tournament, the Etobicoke Atom BBs faced a fierce Brantford Ice Cats squad in the finals.  Even though the Dolphins had scored in bunches in the round robin, they found themselves in a very tight 0-0 tie deep into the third period of the final.  Thankfully, Dolphin netminder Ally was sharp when she had to be to keep a donut on the board for Brantford.  The Dolphins’ play was solid with good puck movement and pinching from defenders Lauren, Maddy, Leagh, Emma and Vic.   And the forwards, including Angelica, Trinity, Mack, Celena, Amelia and Emise were aggressive and had a very good bead on the Brantford goalie’s chest protector and pads, but not, as the girls call it, on “the meshy part”.  Finally, Julia conjured her usual sorcery to get the puck to the net. Abby and Aislinn then drove to the net looking for a loose puck, where Aislinn finally put the puck over the goal line to give the Dolphins a 1-0 lead which held up for the win.   Way to go Silver Stick Champs!