The Dolphins Atom AA took four straight games at the Oakville Hornets Harvestfest tournament this past weekend. The girls edged Oakville 3-0 Friday to kick off the event led by a natural hat trick from Charlotte Garofalo and a shutout from Paige Oliver. 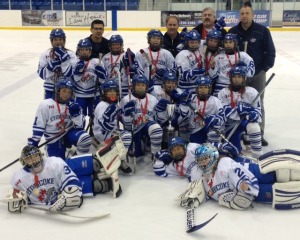 Sunday morning, London returned to take on our Dolphins in the final and the game was tied 1-1 going into the third as our girls were being stoned by a very hot Devilettes goaltender. At the beginning of the third period, Mckenna Van Gelder broke free after great defense and passes from the Charlottes (Hallett and Garofalo) and then deked the pads of London’s outstanding keeper to put the Dolphins ahead. Too late open net goals sealed the victory and the tournament gold. Although outshooting the opposition 30-3, our girls were patient and poised and showed discipline in a very tight game against a spirited London team.

Along with the line of Van Gelder, Abela and Garofalo, goals were scored in bunches by our “911 Line” in Reese Oliver, Izzy Greco and Wallis York. Our ”JEM” line also scored multiple times led by Jessica Mark, Ella Chiarelli and Meg Arzuman. Our defense was rock solid all weekend led by Paige Allen, Maya Menezes, Alyssa Regalado, Olivia Knock and Charlotte Hallett.

Congratulations girls on a terrific weekend!